“Across Canada, there has been agreement on the importance of developing anti-racism strategies within public systems, but a new report from People for Education finds that implementation of those strategies is both inconsistent and under-resourced.”

Slow-down in implementation of Ontario school board equity plans

People for Education’s new report – A progress report on anti-racism policy across Canada – is based on a pan-Canadian scan of anti-racism policy and legislation; data from the 2021-22 Annual Ontario School Survey; and findings from a scan of the websites of Ontario’s 72 publicly funded school boards.

The report points to a particular lag in implementation of Ontario’s anti-racism and equity strategies for schools.

In September 2021, Ontario’s Deputy Minister informed school boards that starting in May 2022, they would be expected to submit annual Board Improvement and Equity Plans (BIEPs) that included student demographic and outcomes data as well as equity-focused action plans.  All boards were expected to be collecting student demographic data to support the BIEPs by September 2022.

Since then, mention of the Board Improvement and Equity Plans has disappeared from Ontario’s Ministry of Education website, and the deadline for collecting race-based data appears to have been extended to January 2023. The People for Education report found that by the summer of 2022, only 67% of Ontario school boards had begun conducting student identity-based surveys, and only 49% of Ontario schools reported having developed and implemented school-wide policies on anti-racism and equity.  In responses to the 2021-22 Annual Ontario School Survey, principals reported many challenges in implementing anti-racism strategies in their schools including being understaffed and having limited bandwidth to add new initiatives because of the pressures resulting from more than two years of disruption connected to the COVID-19 pandemic.

The picture across Canada

In 2019, the government of Canada committed $45 million to support a three-year Anti-Racism Strategy. The funding included $6.2 million to support the work of Statistics Canada and the Centre for Gender, Diversity and Inclusion Statistics, to “enhance the collection of disaggregated data that can be broken down by meaningful categories of race and/or ethno-cultural origins.” However, Statistics Canada continues to ask Canadians only if they identify as a “visible minority”, which means data cannot be disaggregated into specific racial groupings, preventing systems from knowing what disparities exist among different populations of people.

While 6 of Canada’s 13 provinces and territories have anti-racism policies or legislation, a recent United Nations Committee report on Canada’s progress in implementing the Rights of Child was highly critical, pointing to the absence of a national strategy and implementation framework, which includes the lack of pan-Canadian data collection. 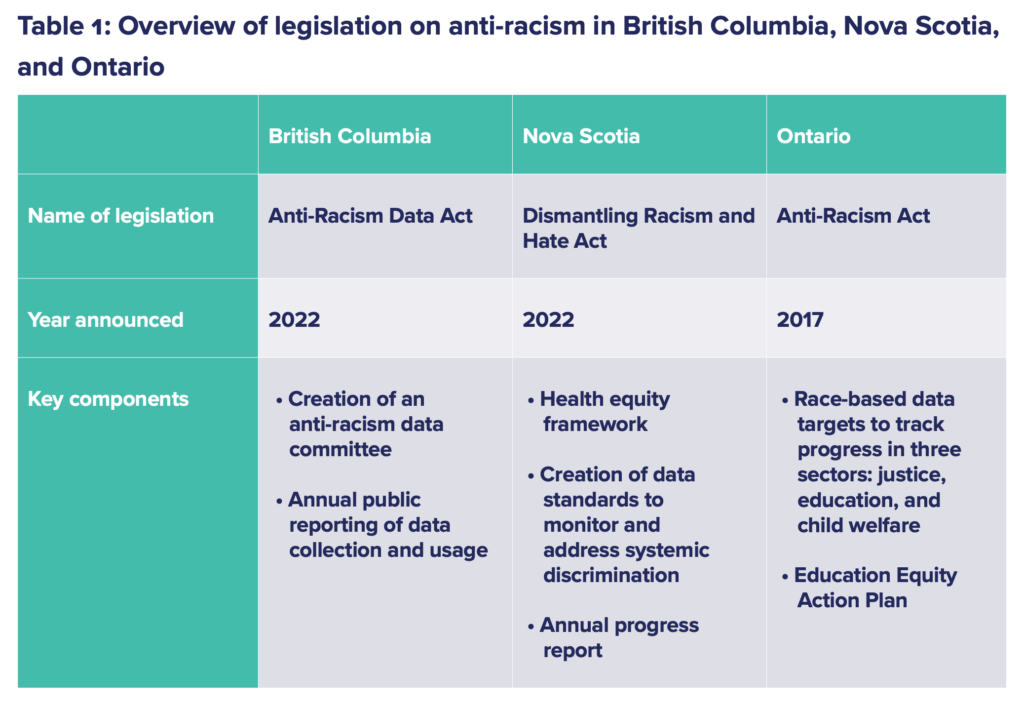 Collecting disaggregated data, including race-based data, is a fundamental step in institutional accountability because it provides evidence on where gaps exist and where further attention is needed. While some provincial/territorial strategies include data collection, Canada and Ontario are lagging. Anti-racism policymaking has begun in Canada, but the work is currently piecemeal and lacking consistency.

People for Education’s recommendations for change